“I also brought wine, but this is for me. I’m drinking the whole bottle.” — Olivia Pope, Scandal

Like Alicia, Olivia Pope drinks large glasses of red liberally. Her taste, however, is a bit more refined: colleague Quinn Perkins says Olivia’s “tell” is “Rare, complex, fantastic red wine.” While the specific wines Olivia name-drops, like ’94 du Bellay, are fake, we know she indulges in French wines “that will bring tears to your eyes” from regions like Bordeaux and Châteauneuf-du-Pape. Her penchant for eating bowls of popcorn with her bottle of choice, however, leaves us surprised she never considers the classic pairing of popcorn and Champagne.

“This will make sense if I get more wine.” – Alicia Florrick, The Good Wife

Red wine, generously poured, is the go-to beverage for The Good Wife’s resilient and fiercely smart Alicia Florrick. It’s clear from her litigation wardrobe Alicia’s a woman of refined taste, but she doesn’t claim to be a particular connoisseur when it comes to wine, appearing to note little of the profile when she drinks. She’s been known to quaf Merlot, a grape that lends soft mouthfeel and low tannins that make it easy to get along with. 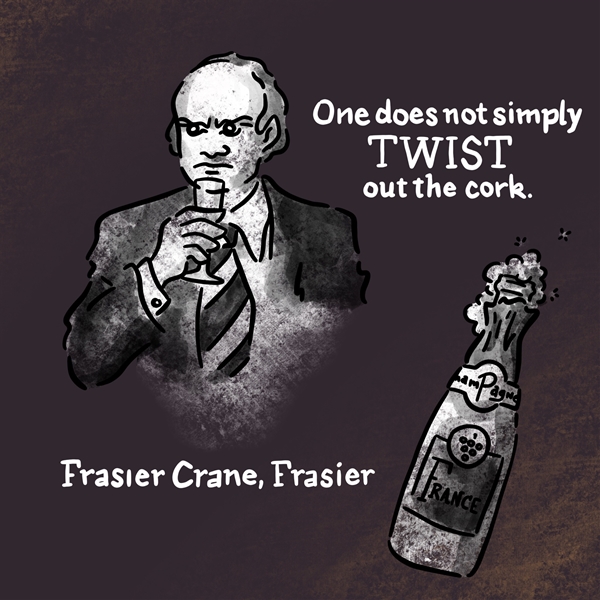 “One does not simply twist out the cork.” — Frasier Crane, Frasier
Like Oliva, Frasier Crane often waxes poetic about French AOC’s like Châteauneuf-du-Pape and Côtes du Rhône, and his brother, Niles, is always right there with him. In Season Two, for example, the sibling psychiatrists open a short-lived French restaurant with a wine focus, and in the seventh season the brothers battle in a blind tasting for the title of “Corkmaster.” Frasier, who often celebrates special occasions with Champagne, was best known, however, for stocking his Seattle apartment’s home bar with sherry and a collection of suitably petite glassware, long before the modern resurgence of sherry in the craft beverages movement. But what wine will he not abide? The snobbish brothers once diagnosed Frasier’s producer, Roz, as having below-average intelligence because she “ordered a bottle of white zinfandel!”

“I drink and I know things.” — Tyrion Lannister, Game Of Thrones
“More wine.” — Cersei Lannister, Game Of Thrones
There are many issues the two most devious Lannister siblings don’t agree on, but one thing that brings them together is their love of wine, particularly Dornish varieties produced in the arid Southern region of fictional Westeros. Dorne is known for great wine, and is likely producing styles akin to Spanish reds like Tempranillo, Monastrell (the grape called Mourvèdre in France), Garnacha (also known as Grenache), and Bobal. Indeed, author George R. R. Martin has confirmed that Dorne was heavily influenced by Spain.

Vanessa Baxter talks a lot about wine, but rarely about what specifically she’s drinking. Her glass, however, is almost always filled with white wine, and given the shape of her regularly green bottles, it’s a good bet her drink of choice is chardonnay or viognier, particularly because those are two grapes often grown locally in her home state of Colorado.

“If you’re gonna be part of this family, you’re gonna learn to love wine.” — Jules Cobb, Cougar Town
Anyone who’s seen Cougar Town knows it’s about two things: friendship and “pounding grape,” which is protagonist Jules Cobb’s slang for drinking wine. No episode goes by without Jules and her Cul-de-Sac Crew enjoying large quantities of wine, usually red. (White, Jules says, is reserved as “thinking wine,” because of its lower alcohol content.) Unlike Julianna Margulies, who sipped Welch’s grape juice as Alicia on The Good Wife, Cougar Town star Courtney Cox was fond of method acting, often taking a gulp of the real stuff from one of her progressively larger oversized wine glasses: Big Joe, Big Carl, Big Lou, Big Tippi, and Big Chuck. Creator Bill Lawrence confirmed the wine on set was authentic “more often than you think.” While Lawrence admits he missed an opportunity by not creating a Cougar Town brand of wine, he says the cast was thrilled that wineries sent free bottles their way. A keen eye can pick out some of the actual producers they enjoyed: Here, Jules drains multiple glasses of Brassfield Estate Winery’s Eruption through straws, and here you can spot a bottle of Orin Swift’s The Prisoner ready for patio-drinking. Cougar Town’s love of wine was so contagious, some of their jokes became reality: When Jules and Andy repped a fake novelty wine item called the Guzzle Buddy, for example, it inspired a real product.

“You’ll get plastered on a snifter of sherry.” “Ah, paradise.” — Cora and Robert Crawley, Downton Abbey
Unlike Cougar Town, Downton Abbey seized the opportunity to market its own branded wine collection. Frasier would perhaps be pleased to know he and the Crawley household share similar taste in wine — a tipple of sherry or a glass of Champagne to honor celebratory occasions, and French Bordeaux during many a meal. Over the course of the series, Mr. Carson the butler can frequently be spied performing wine duties such as meticulously decanting bottles through cheesecloth to strain out wine sediment. While British bubbly has recently come into popularity, Britain was not a wine-producing country in the early 1900s, so any sparkling offerings would have been imported; Veuve Clicquot is notably name-dropped when it’s poured both upstairs and down in honor of valet John Bates being cleared as a murder suspect.